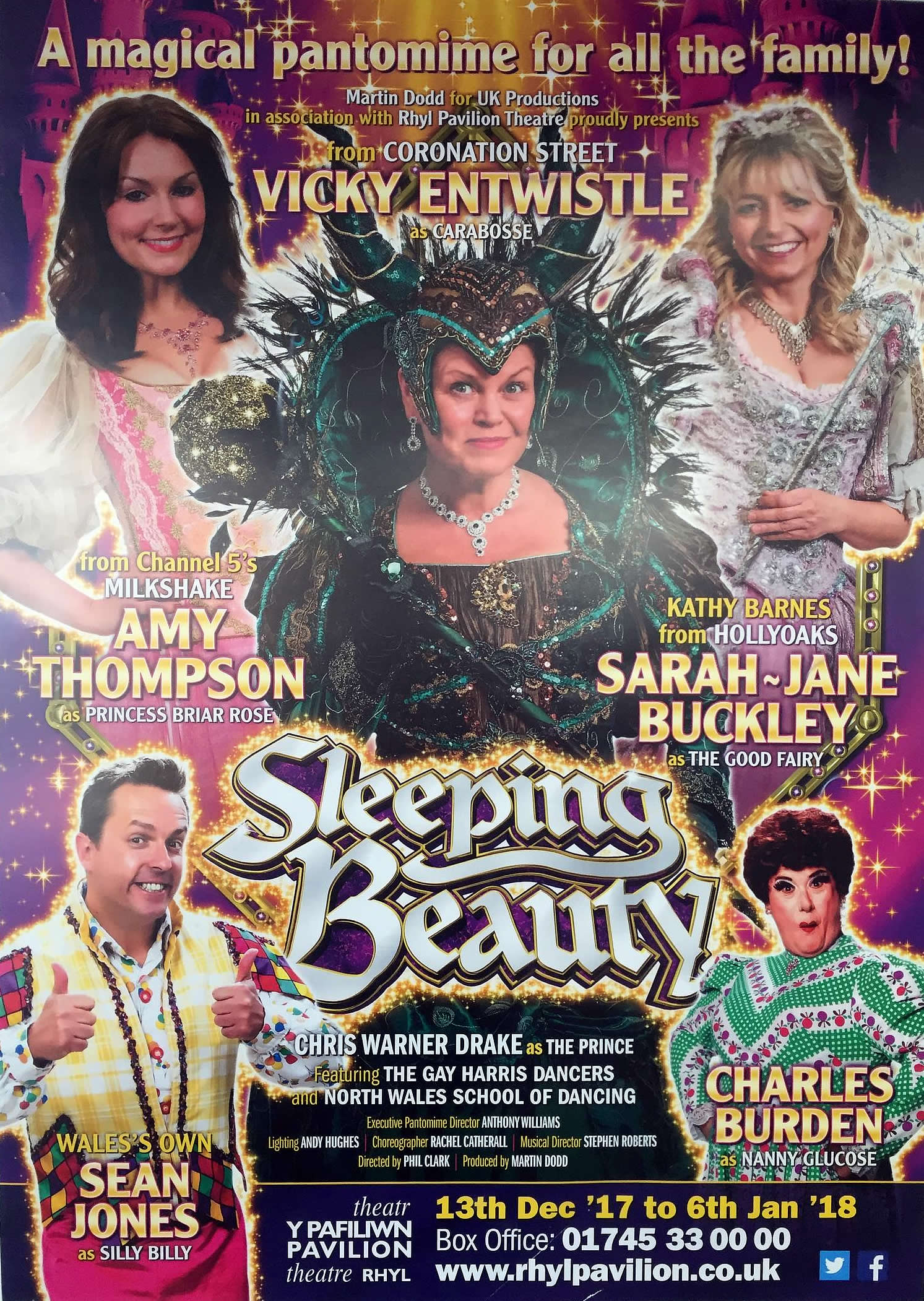 “Magical masterpiece…….all the ingredients for a fantastic tale”
Daily Post

I’ve seen more than my fair share of Pantomimes this season – oh yes I have! I’m having a ball and I’ve liberally dished out the stars which have been richly deserved. However, I have found one which deserves more than five stars, and that’s Sleeping Beauty which is gracing the stage of Rhyl Pavilion Theatre.

I couldn’t find fault with this stunning spectacle if I tried and there’s not one weak link amongst an exceptional cast who each play a full role in the show. Unlike many shows I’ve seen before where a Fairy might only be seen for a few key scenes and a King would appear a handful of times – every character is at the hub of the perfectly paced production.

There’s a fantastic mixture of musical numbers and with Sarah Jane Buckley as Fairy Snowflake, Vicky Entwistle as Carabosse and Amy Thompson as Sleeping Beauty herself, at the helm, musically the show is already in superb hands. All three female leads have stunning vocal capability which they demonstrate to the maximum. Add Sean Jones to the mix as the hilarious Silly Billy and Chris Warner Drake as the Prince and the performance level is taken to another dimension. With Charles Burden as Nanny Glucose bringing a wealth of experience to the show and Sam Patrick making an excellent Pantomime debut.

The combination of modern material blended with traditional madcap pantomime high-jinx delighted the packed house and truly makes this a pantomime with something for everyone. Family orientated with jokes for adults and the smaller members of the audience.

The scenery is quite something, providing an elaborate backdrop fitting for the fairy tale. There are a few special effects which I won’t spoil, however the quality of the content means that effects are merely a bonus feature. Magic is created by every actor on stage who are each giving 110% to make this a pantomime de force.

The opportunities for audience participation are plentiful, the fourth wall is smashed, just as it should be. Sean Jones is nothing short of a comedy genius and his natural talent is reminiscent of the comedy heroes I grew up watching. Charles Burden’s Nanny Glucose is an able sidekick for Billy, a traditional Dame indeed with many quick changes and a superb range of costumes. Chris Warner Drake played the Prince as a solid, dependable hero and he was a perfect match for Amy Thompson as the gentile and beautiful Princess. I’ve seen Thompson as Sleeping Beauty previously and she never fails to impress me, she is one of the finest Pantomime Princesses I’ve seen. Vicky Entwistle as Carabosse was a revelation to me, such a seething, feisty and fiery baddie – Entwistle embraces the role and gave an outstanding performance. As for Sarah-Jane Buckley, she’s the epitome of magic, sparkle and silliness. She’s glitzy, glittery and also offers precise comic timing and a West Country accent! The best Fairy in Panto-land, in my humble opinion.

If you’re in need of a post-Christmas pick-me-up then this seaside extravaganza is just the ticket and you’ve got just over a week to see it.